By Bonnie Tsui for The New York Times

The crispy Chinese duck, served atop soft Japanese white bread with five-spice gravy and garbanzo mash, was unexpected, and robustly savory. “It’s like Asian Thanksgiving,” my dining companion said as she mopped up the gravy and I extracted the delicately crunchy pieces of duck at Honolulu’s light-filled, elegant MW Restaurant. “Something for everyone.”

That could also describe what’s happening with the recent wave of Honolulu restaurants, which take inspiration from farmers’ markets and Hawaii’s Asian heritage, but with novel takes from high-end chefs with impressive fine-dining pedigrees. The cornucopia of farmers’ markets all over Oahu has helped fuel this latest round, since local ingredients — once scarce, with just about everything flown in from the mainland — are increasingly available to island chefs.

Some brick-and-mortar restaurants, such as the Pig and the Lady, even had their start in farmers’ market booths around the island, where they gained a devoted following. “It’s exciting to be in Hawaii right now,” said its chef and owner, Andrew Le, who opened the restaurant in November 2013 in Chinatown to great acclaim. “We have a bunch of local boys, some who started in the mainland and are coming back home to start their own businesses. We’re bringing the mind-set of the local diner, elevating what people perceive as good food. Before, it was plate lunch, laulau and all that — it’s ingrained in us. The whole renaissance going on right now is young energy.” 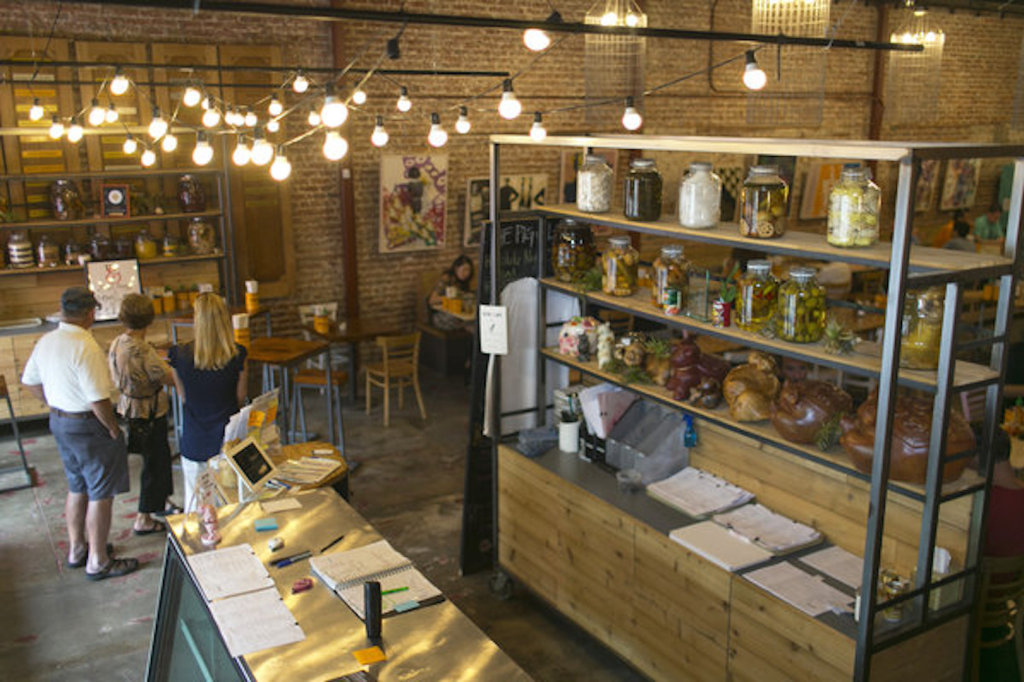 The Pig and the Lady’s menu, with its focus on noodle soups, varying preparations of pork and always-changing market dishes (on my visit, the sashimi of the day was hamachi), underscores Mr. Le’s connection to local produce and his Vietnamese roots (the “Lady” in his enterprise is his mother, Loan Le, whose home cooking has grounded her son’s formal culinary training). One daily special, a green papaya salad with sprouted mung beans, long beans, peanuts and nuoc cham, was extraordinarily bright and flavorful. The exposed brick, hanging branches, chicken-wire lamp shades and Edison bulbs lend the space a pleasingly rustic, homey vibe, as do the jars of pickled items in display shelves in front.

At MW Restaurant, the scene of my friend’s Asian Thanksgiving, the chef-owners Michelle Karr-Ueoka and Wade Ueoka spin their own version of comfort food: oxtail stew risotto, shrimp and uni pasta, beer-braised pork belly bao. The latter were freshly steamed and pillowy, filled with savory-sweet pork. A peppery Ma’o Organic Farms salad of tatsoi and mustard greens was a standout, as were the fresh, vibrant cocktails and the attentive service.

“I grew up on the local foods: fish stew and rice, ramen, saimin, poke,” Mr. Ueoka told me. “We’re putting our own twist on it, creating those dishes with the farmers we’ve gotten to know.” They’re also building on the education in Hawaiian regional cuisine they received while working for Alan Wong, an early proponent of the locally sourced movement in the mid-1990s. In the summer of 2013, before MW’s fall opening, the Ueokas partnered with Ho Farms at a farmers’ market stand, serving dishes made with the farm’s vegetables alongside the fresh produce and developing relationships with other producers. Now, Mr. Ueoka said, “the farmers come to us when they’re growing new things.”

Using the same ingredient-driven philosophy, Ms. Karr-Ueoka creates MW’s gorgeous, inventive desserts: delicately wrapped ice cream sandwiches, a tropical creamsicle brulée made with tapioca pearls. The more local farms restaurateurs buy from, the more self-sufficient Hawaii will become, Ms. Ueoka said. “Some say farm to table is a trend, but in reality it’s a way of life for us.”

Other variations on the theme include Mark Noguchi’s soon-to-open Mission Social Hall and Cafe, a lunch cafe in the historic Hawaiian Mission Houses Museum that serves contemporary Hawaiian food inspired by dishes of the 19th-century missionary era — tofu poke, short-rib luau stew, hand-pounded poi — and, on the other end of the spectrum, the relentlessly haute Vintage Cave, where the Japanese-influenced tasting menu — at $295 a head — identifies dishes by ingredient, and the staff includes a part-time wild forager.

But no matter what the format, Mr. Le of the Pig and the Lady said, the philosophy for this young generation of chefs is the same. “We love where we live, and we want to be able to feature Hawaii at its best.”