From The Los Angeles Times

Lava from Kilauea’s bubbling new vent has yet to swallow a single home or close a key thoroughfare, but the volcano has changed everything in this little town on the Big Island.

National Guard members are a 24/7 presence. Roadblocks keep disaster tourists at bay. Schools have closed. The dump has been relocated — to within an easy sniff of the unhappy Nani ‘O Puna apartments.

The Locavore Store, which sells bounty grown by its “farmy neighbors,” closed on Halloween. An apologetic sign on its empty storefront explains: “We will be re-opening on the north side of the lava flow. New location and opening dates TBD.”

Lava from the newly formed Kilauea vent, which opened June 27, is sliding toward the ocean, edging ever closer to Pahoa’s main street. The molten rock — 2,100 degrees Fahrenheit — threatens to cleave this town of about 950 and cut off thousands more people from jobs, churches, schools and healthcare.

Kilauea has been erupting steadily for 31 years but hasn’t destroyed a home since 2012 — when it picked off the last one in an area the volcano had damaged decades earlier. Not even vulcanologists know when — or if — it might happen again.

People talk about “the Hilo side” and “the lava side” of the still-intact town. They scramble to figure out if they can afford to relocate. They fear the impact on their enclave of tank tops, tattoos and extreme piercing, where an old man in a volcano tee cycled down Pahoa Village Road this weekend with a chicken on his shoulder.

“Pahoa’s not the same already,” said Shanelle Nelson, 20, a saleswoman behind the counter at Jeff Hunt Surfboards. “It’s crazy. I could get cut off from the beach.”

A “Prayer for Deliverance” has been added to the end of Mass at Sacred Heart Church, a crisp white sanctuary in the lush landscape, where ceiling fans spin in front of the crucifix and elderly women worship in pre-Vatican II lace mantillas.

After communion was served and the Our Father sung during Saturday’s early morning Mass, the faithful reached for slips of orange paper, printed with prayer, softened by humidity and handling, tucked into the backs of pews alongside hymnals.

“Almighty and merciful God, look with compassion on our affliction, particularly the threat of the lava flow that our community is facing,” the congregation read as one. “Lighten our burden, confirm our faith and deliver us from all harm that this lava flow poses.” 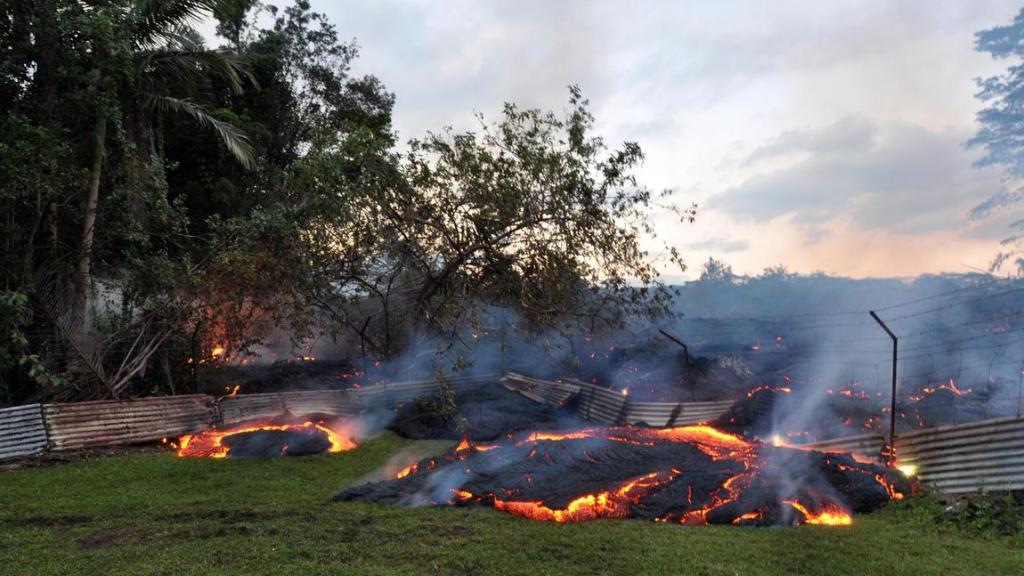 A very different deity is petitioned about three miles away. That’s where Keonepoko Elementary School sits, closed for the foreseeable future, forlorn in the morning rain. Its chain-link fence is a flutter of red cards printed with the heartfelt prayers of teachers and students transferring to safer campuses.

“Aloha Madame Pele. We love and honor you,” began a note to the volcano goddess. “Please protect this place, Keonepoko. May we return to continue to educate the keiki of Hawai’i nei,” the children of beloved Hawaii.

Another note was much more basic, though not as accurately spelled: “Don’t brack our school,” a little girl wrote. “We don’t want to die.”

Rieshel Hess, 9, is one of an estimated 1,700 students displaced by the slow-moving lava. She said she would soon transfer from Keonepoko to Pahoa Elementary School. On Saturday, she helped tie strips of red cloth — Pele’s color — to the chain-link fence around her new campus, spelling out the word “Aloha.”

Rieshel worries about “what’s going to be our life with the lava flow.” Her note to Pele, which hangs from the fence at Keonepoko, is short and beseeching: “Dear Pele, Please do not destroy our school because I like the school very much and it’s my favorite school I went to.”

Laverne Hess, Rieshel’s mother, said living in volcano country was an exercise in “day by day. It’s stressful at times. You don’t know what to do. Do you move to the city? Our home is here. It’s hard to let go.”

Hess’ father survived Kilauea’s 1960 eruption, which destroyed the town of Kapoho about eight miles away. She herself recalls vividly when the volcano blew in 1983, burying Kalapana, about 13 miles southwest, in thick, black lava.

A Native Hawaiian, Hess said she prayed daily to the goddess of fire, volcanoes and violence, a deity who jealously guards the land she claims as her own.

“Her presence is here all the time, every day,” Hess said, tying strips of cloth to the fence as rain threatened. “I just tell her, ‘Keep us safe and let us make the right choices.'”

This lava flow has been moving in fits and starts for months, allowing contingency plans to be put in place, supplies to be stockpiled, emergency roads to be built. Or as Neil Berez put it as he read from a cracked tablet device at Tin Shack Bakery on Saturday: “Walk! Walk for your life!”

The 45-year-old has been finishing catchment tanks for collecting rainwater and a solar electricity system to power his home should lava damage the grid.

“The most interesting thing is watching people’s reactions,” Berez said. “Some panic pretty easily. Others don’t think about it deeply enough and are going to find themselves without resources.”

Then there are people like Mikel Roe, 68, a retired vegetable and marijuana farmer. Roe has a parasite called rat lungworm, which can affect the nervous system. He lives in Pahoa, cannot drive, and has been told by his doctor that he should leave town — now.

“In order for me to get pain medication, I have to go to Hilo every month,” Roe said over coffee at the Tin Shack. “They want me to relocate so I’m closer to the doctor and the hospital. … I can’t afford to do that, so I’m stuck on this side.”

The Kilauea volcano, officials said at news briefings throughout the weekend, has destroyed 214 structures since 1983, including most of Kalapana. It did not, however, claim that coastal town’s historic Catholic church.

Dee Adkins belonged to the Kalapana parish in 1990, when its members decided the only way they could save their church was to move it. So they put the structure on a flatbed truck and raised telephone lines to allow its steeple to pass underneath.

Adkins has since moved to Pahoa, where her home is threatened yet again. Leaving Mass at Sacred Heart on Saturday morning, she said her family was putting together a relocation plan.

Which does not include leaving the area forever.

“The only way I can describe the feeling I got when I first got to Pahoa is that I was on sacred ground,” said Adkins, assistant director of nursing at a long-term care facility. “God is in this place.